Mark your calendar as the 17th Annual Louisiana Book Festival will launch online programs on Saturday and Sunday October 30-31, 2021. Additional new content will be available over the next two weeks from Friday November 5 through Sunday November 7 and Friday November 12 to Sunday November 14. This free, annual family-friendly festival celebrating readers, writers and books is presented virtually this year. Over 80 authors and presenters will discuss their books in more than 40 virtual programs, including 15 presentations for children, tweens and teens. The virtual programs can be viewed on the Louisiana Book Festival YouTube channel.

On a weekend night on prime-time television, a then-unknown singer and a staple of Los Angeles’ nascent jazz pop scene rose to fame overnight after a now iconic performance on Saturday Night Live. The year was 1979, the song Chuck E is in love, and singer Rickie Lee Jones, wearing her signature red beret, will soon be pronounced “Duchess of Coolsville” by Time magazine. Last Chance Texaco is the very first limitless account of the life of one of rock’s hardest working women, in her own words. With candor and lyricism, Jones takes us on the path of her exceptional life: from her nomadic childhood as the granddaughter of Vaudevillian artists, to the abandonment of the family by her father and her runaway teenage years, her Debut at the Troubadour Club in LA, her tumultuous relationship with Tom Waits, her battle with drugs and her longevity as a woman in rock and roll. 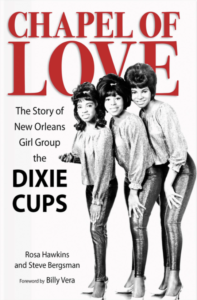 Steve Bergsman, author of Chapel of Love: The Story of New Orleans Girl Group the Dixie Cups, in conversation with Courtney McCreary, SSenior Publicity and Promotions Manager at University Press of Mississippi.

In 1963, sisters Barbara Ann and Rosa Hawkins and their cousin Joan Marie Johnson traveled from the isolated south to New York City under the auspices of their manager, former pop singer Joe Jones. With their wonderful harmonies, they were an immediate success. To date, the biggest Dixie Cups hit, â€œChapel of Love,â€ is considered one of the best songs of the past sixty years.

The Dixie Cups seemed to have the world on a rope. Their songs were lively and popular, singing about topics such as love, romance and Mardi Gras, including the classic “Iko Iko”. Behind the curtain, however, their real story was one of cruel exploitation by their manager, who continued to harass the women long after they finally broke with his robbery and assault. Of the three young women, none suffered more than the youngest, Rosa Hawkins, who had barely graduated from high school when the New Orleans teenage girls were discovered and transferred to New York. At the height of their success, Rosa was a naive singer trapped in a world of abuse and manipulation.

Chapel of Love: The Story of New Orleans Girl Group the Dixie Cups explores the ups and downs of one of the most successful girl groups of the early 1960s. Telling their story for the first time, in their own words, Chapel of Love reintroduces the Louisiana Music Hall of Famers to a new audience. 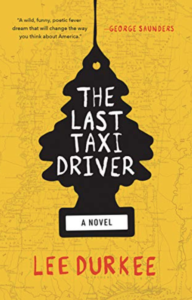 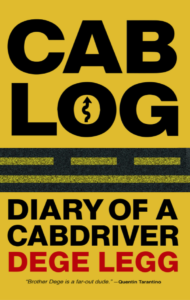 Taxicab Tales: Fact and Fiction, a conversation with Lee Durkee, author of The Last Taxi Driver: A Novel, and Dege Legg, author of Cablog: Diary of a taxi driver

Hailed by George Saunders as “a true original, wise and extremely talented writer,” Lee Durkee takes readers on a high-stakes cab ride through unforgettable change. Meet Lou â€• a, deceased novelist, struggling Buddhist, and UFO fan, who drives for a ramshackle taxi company that operates on the outskirts of a college town in northern Mississippi. With Uber moving into town and his lifestyle fading away, his girlfriend moving out and his nemesis dispatcher suddenly returning to town on the run, Lou must end his shift aiding and cheering the host of haunting fringe criminals. the backseat of his disintegrating city car. Lou is forced to decide how much he can take as a driver, and whether keeping his job is worth the trouble and the heartache.

Relief of nuts and bolts, The last taxi driver crosses freeways and back roads, from Mississippi to Memphis, as Lou becomes more and more sleepwalking and his fares more and more eccentric. In equal parts Bukowski and Portis, Durkee’s dark, comedic novel is a feverish, hilarious, and gritty look at a forgotten America and a man at a crossroads.

In Cablog: Diary of a taxi driver, broke and unemployed musician lands a gig driving a cab through the swamps of southern Louisiana while swaying and weaving through a night world ruled by drugs, guns, saints and strippers. In this creative non-fiction work, Grammy-nominated musician and award-winning writer Dege Legg (aka Brother Dege) chronicles five years behind the wheel while documenting the underworld of Lafayette and its Cajun and Creole hinterlands. From penthouse suites upstairs to crack houses downstairs, Legg tells thick-skinned stories about oppressed wrecks, minor victories for the forgotten, and redemption in the face of it all. Notebook resonates with tones of Bukowski, Miller, Chandler and Kerouac while tracing its own new territory of the human mind. 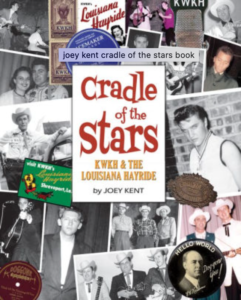 Joey Kent, author of Cradle of the Stars: KWKH and the Louisiana Hayride, in conversation with Antoinette DeAlteriis, Director of Promotion at Pelican Publishing

This entertaining and imaginative timeline of the town of Shreveport Hiking in Louisiana the radio and theatrical program is written by the historian and archivist of the place. The Hayride is credited with introducing the world to Hank Williams, Elvis Presley, Johnny Cash, George Jones and many more. The author’s father helmed the series in the 1970s and 1980s.

Fifteen young adult authors and a true rock star come together for an epic – and interconnected – undertaking a memorable high school rite of passage. In Battle of the Bands, a girl from rock’n’roll royalty has a secret crush. A lonely bill taker worries about his sister. An almost famous songwriter heals old wounds. A stage manager tires of being behind the scenes. A singer-songwriter struggles to disentangle her feelings for her best friend and girlfriend. In this live-action anthology, the disparate protagonists of sixteen stories come together for an unforgettable event: the battle of their high school groups. Told in a harmonious blend of first- and third-person narrative voices, short roughly chronological stories offer a kaleidoscopic view of the same transformative night. With an entry from Justin Courtney Pierre, lead singer of Motion City Soundtrack, Battle of the Bands is a celebration of youth, music and meeting the challenges of life.

To learn more about other authors and participants, see the full list on the Louisiana website Delivered Festivalfeatured author’s page. A digital version of the program guide with more details is also available. More information and updates are available on Louisiana Delivered Festival website and on Facebook.

Wiz Khalifa and Method Man and Redman are the artists performing at the first Carniroll, which begins its three-day run Friday at the Three County Fairgrounds in Northampton. Carniroll is described by organizers 4Life Entertainment and Cruz Control Entertainment as a mix of concert, carnival, car show, fireworks and professional wrestling. Tickets start at $55 […]

Musicians all over the community prepare and share holiday music. The public has choice after choice. One of our favorites is the annual joint Sunday afternoon concert of the Iowa City New Horizons Band and the Iowa City Community Band, or NHB / ICCB for short. As musicians, we are thrilled with this chance to […]

Radio Milwaukee aspires to build a diverse and inclusive community through the amplification of music and stories, including giving local artists a bigger stage to stand on. While Radio Milwaukee has always been proud of its support for local artists, we must also recognize the negative impact (trauma and violence) that power and fame can […]